The idea of equations of any sort is an essential component of mathematics. Equations are the formulae which indicate the equality of two expressions. To write an equation, you write two expressions and connect them with the sign of equality (=). The method of expressing the relationship between two variables comprises framing an appropriate equation. Equations also help us in determining missing values of expressions following certain steps. From basic mathematics to advanced mathematics and all those places where there is an application of mathematics, equations play an extremely important role in expressing notions in a mathematical form.

An equation is analogous to a balanced weighing scale. Both sides must have equal quantities and if we are changing the quantities, then we should add or remove the same quantity on both sides to keep the equality intact. A balanced see-saw is another example which proves the point. 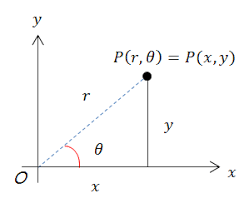 Rectangular equations are one of the most important and common types of equations. A rectangular equation is an equation which we can graph on a Cartesian plane. It contains the variables x and y, which represent the two axes, in any functional form such that we can represent the equation in a graphical form. For example, y = 44 + 6x is a rectangular equation. For those who do not know, in mathematics, a Cartesian plane is a two-dimensional coordinate plane made by the intersection of the x and y-axis. The point where the two axes intersect is the origin.

Imagine a point P on a Cartesian plane with the coordinates (x,y). X is the perpendicular distance of the point from the vertical axis, and y is the perpendicular distance of the point from the horizontal axis. If we draw a right-angled triangle with x as the base and y as the height, we get the distance between P and origin as the hypotenuse length. In such a case, if the point is P, the point at a distance of x from the origin is A, and the origin is O, then there is a triangle POA. So, our base is OA (x), height is AP (y), and the hypotenuse is OP (r). Let the triangle POA have the angle POA as θ. Following such specifications and our knowledge of basic trigonometry, we know PA/PO = sin θ. From here, we can rewrite it as

Thus, in our equation, we may rewrite x as r(sin θ).

Similarly, for y, we know

Therefore, we can rewrite y as r (cos θ).

So, following this method of rectangular to polar equation calculator, we have learnt how to rewrite x and y, the variables of a rectangular equation, in terms of r and θ, that is, polar form. Now let us put this into application.

Suppose our rectangular equation looks like y = x2. How do we rewrite this in the polar form? We will use the conversion technique we just learnt in the above rectangular to polar equation calculator.

The internet has the answer to almost any question one has. But how does it answer our questions? The simplest answer is that people put up answers and algorithms over the internet which finds our answers. These are uploaded on internet sites and our search engine (Google, Bing, and Yahoo!) finds the site which serves our purpose best. Then you can write your question there in a particular format and their website will yield the results. This is very helpful for everyone, especially students and researchers. They can use the materials readily available over the web for their benefit immensely. Everything is just a couple of minutes away.

Wolfram Alpha is one such website. It is a computational knowledge engine and answer engine which uses algorithms to solve questions, including mathematical ones. Wolfram Alpha uses externally sourced data to compute answers for factual queries. You can find the solution for every common mathematical question and transformation, even the rectangular to polar equation calculator of Wolfram Alpha. If you wish to use the internet to find the polar form of a rectangular equation, Wolfram Alpha would be an excellent choice although there certainly are other sources too. Furthermore, since the process is very easy, you should do the conversions manually, at least for simple equations. The idea behind such an exercise is to develop an understanding of how the thing is done under various cases, that is, forms of the rectangular equation.

Mathway is another such website which you can use for mathematics. It was developed in 2002 by two middle school friends as an online problem solver. As you can easily guess by now, Mathway works in a very similar way to Wolfram Alpha. You enter your mathematical expression and apply the mathematical tool to achieve the desired results. Over time, Mathway has become the world’s first fully automated online mathematics tutor too. Besides its website, Mathway is available as a mobile application too.

You can use Mathway as a rectangular to polar equation calculator too in place of Wolfram Alpha. On the website or application, go to the relevant page and enter your equation in its rectangular form, run the analysis, and get its polar form. So now you have a fair idea of how mathematics has been made extremely easy and accessible for everyone. However, it is strongly encouraged that students should learn mathematical applications and tools manually first. Once they have the theory’s idea, they can interpret the results very easily or even solve the problems in case the internet is not accessible. They will also be able to detect any inconsistencies in their mathematical model. In most cases, the website would not help you detect any problem with the question itself apart from showing that the question is not solvable.

Because there are many things that mathway can do, it can often be very tedious to manually locate the function or page where you can put up your question for an answer. Just type “rectangular to polar equation calculator mathway” and your search engine will lead you directly to that page of mathway which looks after this problem. 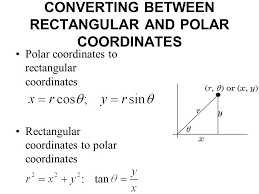 The Cartesian or rectangular coordinate system is the system wherein a point is given a unique “address” on a Cartesian plane in terms of its distance from the two axes which intersect each other perpendicularly.

We denote the point’s location by two numbers within parentheses separated by a comma. The first number and the second number are the perpendicular distances of the point from the y-axis and the x-axis respectively. If the coordinates are, say, (5, 3), then is 5 units away from the y-axis toward the right of the y-axis, and 3 units away towards the top from the x-axis. Note that the coordinates can have negative numbers too. If the coordinates are (-5,-3), then the same point is the 5 units to the left of y-axis and 3 units below the x-axis. The point can be a combination of negative and positive numbers also. In essence, the point is present anywhere among the four “quadrants” on the Cartesian plane.

We know how to convert rectangular equations to polar equations. Just replace x by r (cos θ) and y by r(sin θ). The same thing is applicable for the equation x2 + y2 = 9 also.

Explanation: First we replace x and y with their counterparts in terms of r and θ (theta). Then we take r2 common and add cos2 θ and sin2 θ. Trigonometry tells us their sum is 1, so we are left with r2 on the LHS and 9 on the RHS. If we take the square root of both sides, we get r = 3. This is our equation.

Thus, this is how we transform x2 + y2 = 9 to its polar form using the rectangular to polar equation calculator. 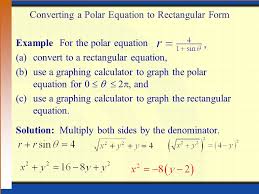 Suppose your question is to convert r = cosec θ to its rectangular form. Follow the steps below:

How do you convert rectangular form to polar form?

How do you write numbers in polar form? 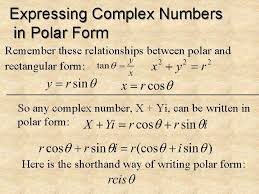 To write any number in its polar form, we use a set of formulae. They are:

How do you convert rectangular to polar on MATLAB? 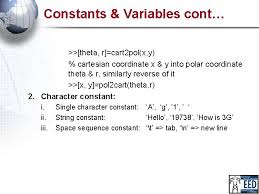 How does cart2pol work MATLAB?