Multiply mass by acceleration – and what you thus, have as a resultant, is the Force Equation. Force has both magnitude and direction, thus making it a vector quantity. In the most literal terms, the force equation is similar to the original form of Newton’s second law. It states that the net force which acts on an object equals the rate of change of momentum over time.

As per Aristotle, a force is anything that causes an item to have an “unnatural motion”. One of the first scientists to explore force and gravity was Sir Isaac Newton though. And in the years to come, he gave the world three laws of motion, each of which help to derive the standard force formula. 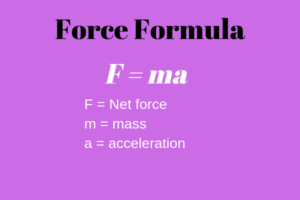 A push or a pull is all that defines a force. It is essentially an interaction between objects that results in changes in their motion though. So, if you were wondering how to get going with the different force equations, then worry not. You have just halted at the right spot. Ahead we shall be shedding light on the various force equations that exist in nature in addition. Furthermore, as an added bonus – we shall take a few simple cases and show you how to calculate each force. Scroll on and read what we have in store for you.

Well, one can define force as a push or pull of an object. The interaction between the objects thus produces push and pull. Likewise, you can also use words like stretch and squeeze to describe forces.

However, the definition of force in Physics is:

The push or pull on an object with mass that causes it to change its velocity.

Force is an external agent that has the power to alter a body’s resting or moving state. Moreover, it also has a specific direction and magnitude. The direction of application of force is its direction, while the force’s point of application is where you exert it.

Hence, you can use a spring balance to calculate force. Newton (N) is the SI unit of force. Dyne, poundal, pound-force, kip, and kilopond are the other units of measuring force though.

Did you know that all forces in classical mechanics are subject to the three Newton’s laws of motion?

Unless an external force acts on an item, it will either continue to move uniformly in a straight line or be at rest.

When one body applies a force to another, the latter simultaneously applies an equal and opposite force on the former.

Furthermore, here are a few of the impacts that force can have:

We can write the formula for Force Equation as:

Let us see an example now. How much net force will you require to accelerate a car of mass of 2000 kg at 4 m/s2?

Well, this problem has an easy solution. You have to just multiply the mass of the car (2000 kg) and the acceleration (4 m/s2) to get the final answer. Thus, you will require 8000 N of net force to accelerate the car. However, remember to always include all units in your problem. It is crucial to write units while showing your math and writing down your final answer.

The proper definition of Centripetal Force states that it is the force that affects any object moving along a curved path. The force is always parallel to r, i.e., the radius of the curvature.

While discussing circular motion, we often use examples including centripetal forces. This kind of non-linear movement is therefore the most basic. In this instance, the radius of the circle serves as the radius of the curvature though. 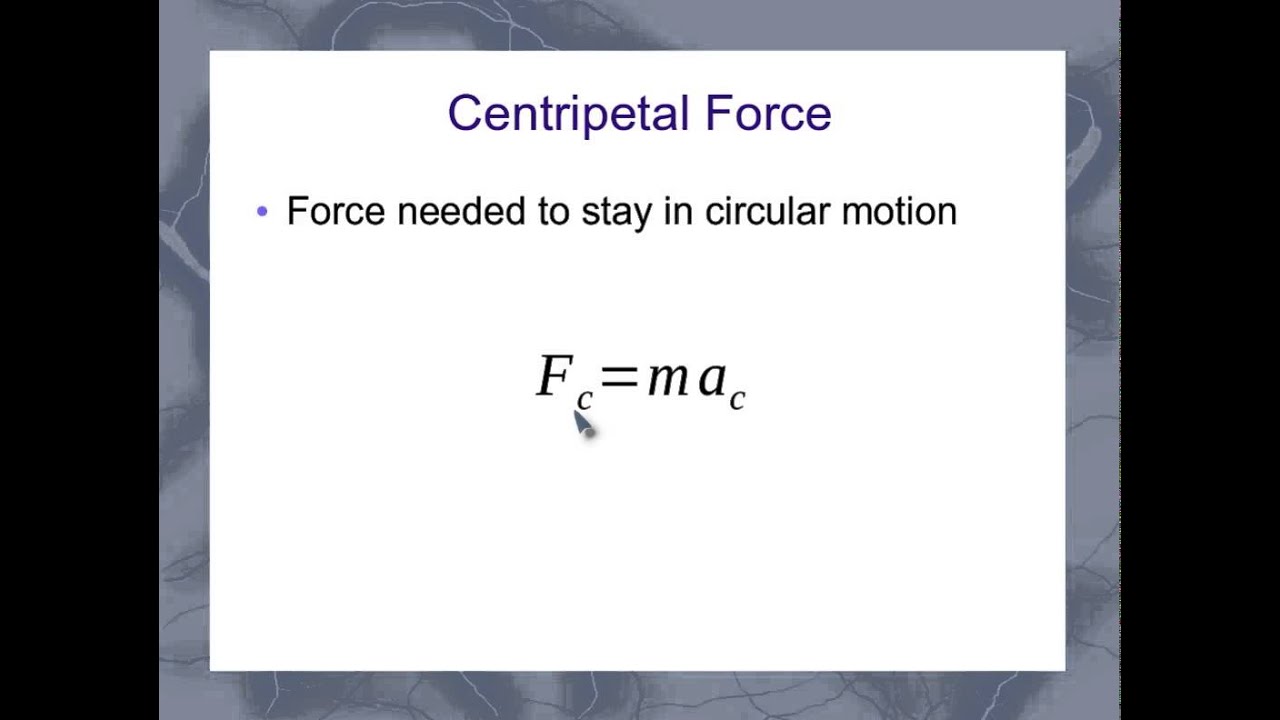 Now, keeping the theory in your mind, look at this example here. Find the centripetal force acting on a vehicle that goes around a circular track. The vehicle’s mass is 3000 kg, it has a velocity of 15 m/s, and the radius of the circular track is 10 m.

Likewise, Newton’s second law states that the formula for centripetal acceleration is a = v2 / r.

Hence, by substituting angular velocity for velocity in the centripetal force equation, rewrite it as follows:

All rotating items, however, are subject to centrifugal force, which acts on them. You’re surely familiar with a merry-go-round, aren’t you? Do you recall how when you would be on it, it felt like you were being pushed away? That effect was brought on you by centrifugal force.

Thus, any object moving in a circular motion experiences a force that appears to be coming from the outside. This is the centrifugal force. This force results in something departing from the center. The formula of centrifugal force and centripetal force is precisely the same, i.e.,

The attraction between any two objects with non-zero masses is the gravitational force. Gravity is the force that prevents you from floating and hence, causes you to walk on the ground. Everything around you, even including the screen that you’re reading this article on, exerts pressure on you. Simply put, it is too little to be noticed though.

According to Newton’s law of gravity, any particle of matter in the universe attracts every other particle with a force. Thus, this force varies directly as the product of their masses and inversely as their distance from one another.

The value of the gravitational constant (G) depends on the units used and is a universal constant. Hence, multiply G by the product of masses and divide by the square of the distance to get your attractive force.

Many of us use springs on a daily basis, yet we often ignore their inertia by treating them like massless objects. A spring undergoes displacement when stretched, compresses when compacted, and returns to equilibrium when free. And this is a very casual process. Therefore, this fact outlines that a spring compresses or stretches a body by applying an equal and opposite force. 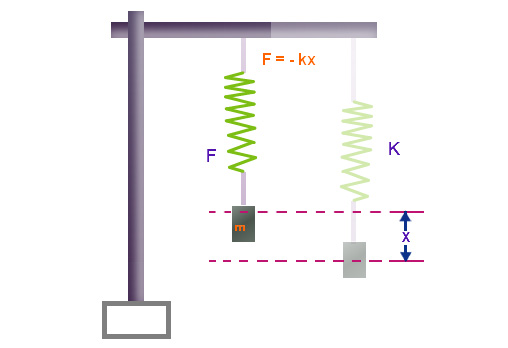 The negative sign indicates that spring force is restoring in nature, and acts in the opposite direction.

Suppose, you have a spring with you, with a spring constant of 5 N/m. Its equilibrium position is at 7 m. When you apply a certain force F, it causes the spring to displace to 10 m from 7 m. Hence, you have to now determine how much force makes it possible for the spring to travel the distance. The solution is easy – just keep plugging the values into the formula we just stated.

The electric force is the interaction of any two charged bodies that is either repelling or attracting in nature. Similar to any other force, Newton’s laws of motion describe the impact and effects on the target body. Likewise, the list of additional forces that apply to objects includes the electric force. Henceforth, to examine the motion caused by that kind of force or set of forces, we use the laws of Newton. 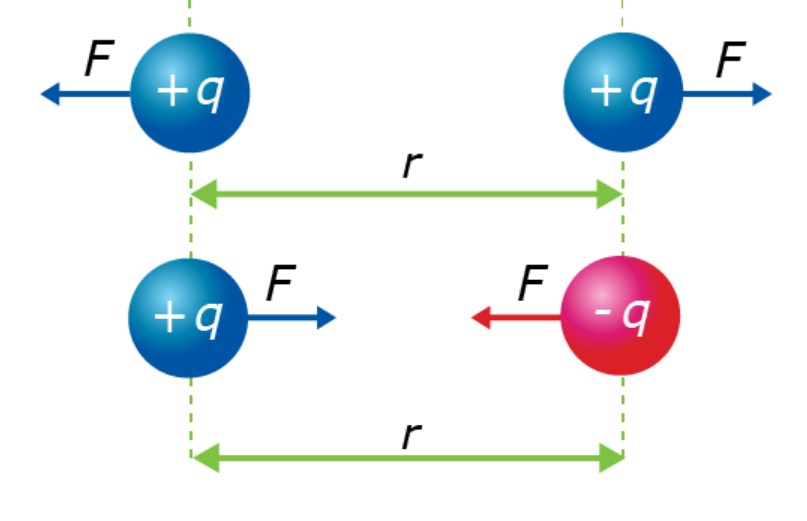 Whether the Electric Force is repulsive or attractive in nature, we use Coulomb’s law to determine it. The following is an algebraic equation that calculates the magnitude of the electric force of an electric field. To sum up, the formula goes like this,

Keeping the formula in mind, let us now proceed to an easy problem. Suppose you have 2 point charges, each with a charge of +6 Coulomb. Further, you place them apart at a distance of 3 m. Will you be able to compute the magnitude of the electrical force of repulsion between them? Take k = 9 x 109 N m2/C2.

The force opposing gravity that prevents a floating item from sinking is known as buoyancy. Sometimes, people also refer to it as the upthrust. The weight of the object pulls it down after you submerge it in water (or any other liquid). Thus, buoyancy opposes that weight. It has a magnitude directly proportional to the volume of fluid that is displaced.

When objects less dense than air float above the ground, you can experience the phenomenon of buoyancy in another setting. 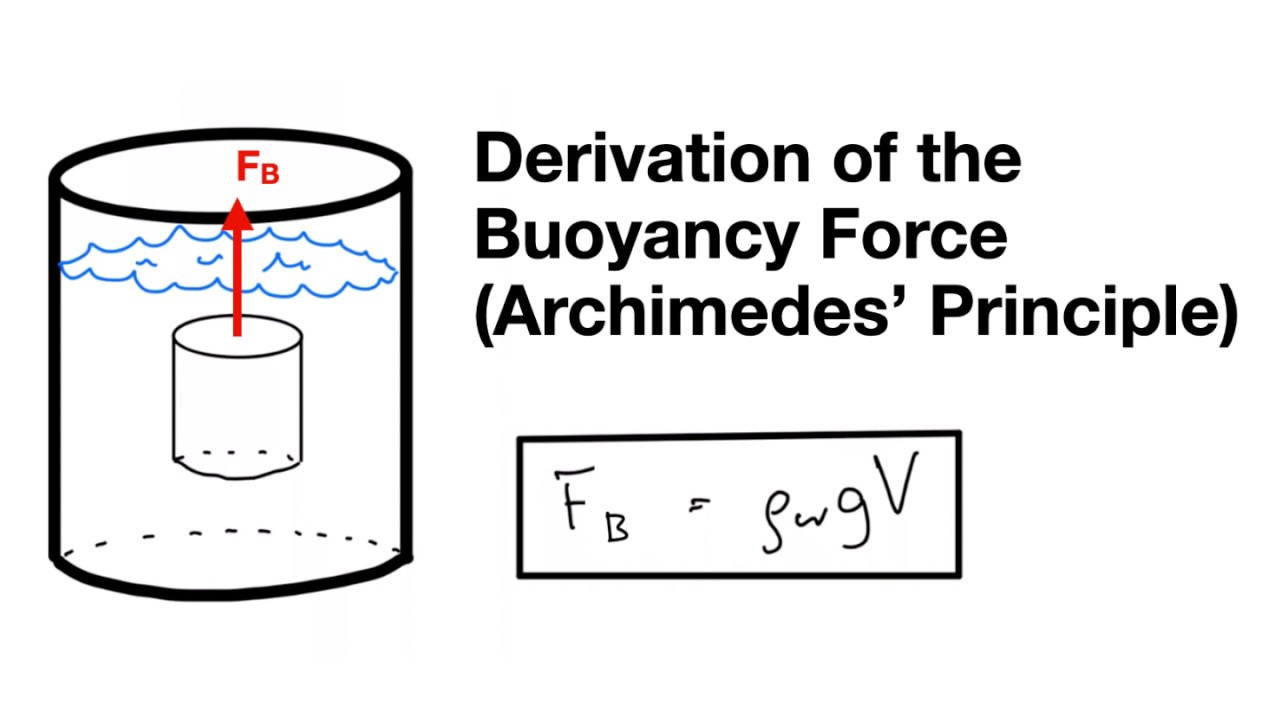 To calculate the force of buoyancy, use the following Buoyant Force equation:

Here,
F = buoyant force
ρ = density of the liquid in which you immerse the object.
V = volume of the displaced liquid
g = gravitational acceleration.

At this point, can you estimate the buoyancy of a 1 L water bottle? Let us show you how to go ahead with the solution.

Now, it’s time to look at a numerical example. You have a body of mass of 120 kg and density of 600 kg/m3, that floats in water. Can you find out what mass should additionally be added to the body, to prevent it from sinking?

Secondly, you have to keep in mind the theory and frame an equation.
Weight of the water displaced = weight of body + additional mass
ρ × V × g = M × g (where M is the total mass).

Note that if you add 80 kg mass or above to the body, it will sink.

The basic definition of force in science is a push or a pull. Depending on what kind of force is being stated, this definition may, however, change.

What is the formula of force?

As per the fundamental force equation, F = ma. Therefore, this implies that the net force applied to an object is equal to the product of its mass and acceleration. Simply put, force is thus, equal to mass times acceleration.

Which force is the weakest in nature?

The force of gravity is regarded as the weakest force in nature. It has a small coupling constant.

Which force is the strongest in nature?

The nuclear force is the strongest in nature.

Name some types of forces in nature.

Forces are mainly divided into two categories – contact forces and non-contact forces. However, some examples of force are as follows:

How can one determine load force?

Isaac Newton’s Second Law of Motion states:
Sum of all forces = Mass of the load times its acceleration.

This is the force equation that we use in the case of a load hanging from a bar. However, if the load is in a state of rest and not moving, the acceleration changes into gravitational acceleration.

What is the SI unit of force?

What is the CGS unit of force?

We are now familiar with the equation
Force = Mass × Velocity / Time.
By multiplying Mass and Velocity together, we can obtain Momentum.
Therefore, Force = Momentum / Time.