Possessive nouns are used to indicate ownership or to describe a feature or characteristic of something. So, a possessive noun may be used if a sentence may be altered to convey that a noun belongs to someone or something. Also, remember that the possessive is usually used in front of the object it owns. Then, Possessive nouns are formed by adding an’s to the word. Also, when a noun represents only one of anything, it is singular. So, even if a single word ends in -s (for example, molasses), an’s is still appended. 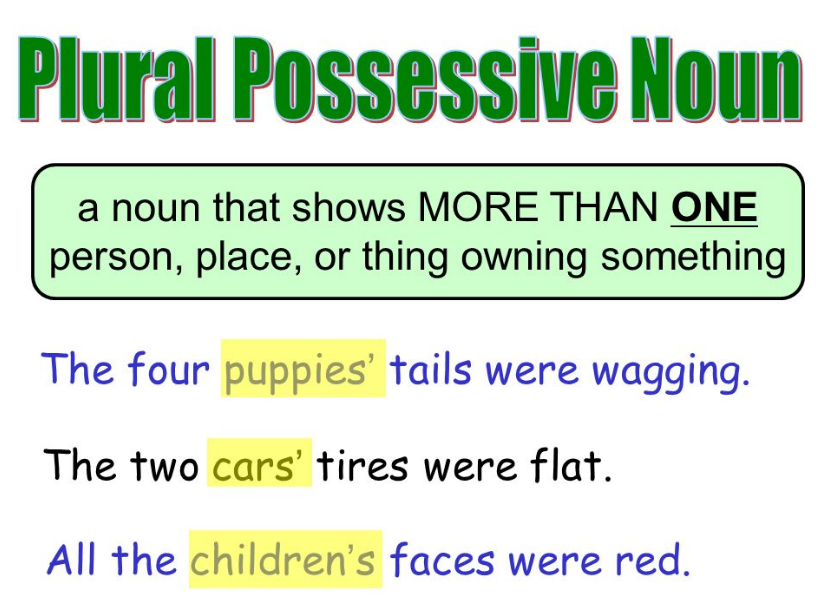 Moreover, most plural nouns become possessive by simply adding an apostrophe to the word. Then, in other words, if the noun’s plural form ends in -s, the plural possessive form will simply employ an apostrophe. Also, irregular plural nouns (such as geese) change form rather than adding a -s to become possessive. Then, when we make them possessive, we consider them as singular nouns. Moreover, in this article, we are talking about this topic. So, keep reading to know more about it.

What does plural possessive mean noun

Moreover, possessive nouns are nouns that express ownership or relationship in the English language. Also, a noun is a term that refers to someone, somewhere, or something. Then, singular nouns relate to a single item, whereas plural nouns refer to several items. Also, a proper noun refers to a distinct person or location, such as the American president or New York. Then, with the addition of an apostrophe and a suffix—the letter “s”—at the end of the word, all nouns become possessive nouns. Then, when a plural noun ends in the letter “s,” the possessive form of the word is just an apostrophe at the end.

Also, possessive nouns can be difficult for new learners, such as those learning English as a second language (ESL). Because they act similarly to adjectives in that they alter another noun or pronoun in the phrase. However, a few simple principles on how to use an apostrophe and the letter “s” correctly can assist new learners negotiate the difficulties of utilizing possessive nouns.

Also, to comprehend what a plural possessive noun is, first grasp what each component of the phrase means on its own. Then, to begin, plural refers to more than one. Moreover, plurals are typically formed by appending the letter “s” to the end of a singular word, however certain irregular plurals deviate from this convention. So, take a look at the following tables:

Also, a possessive adjective is one that denotes when something is owned or possessed. Moreover, possessives are used by writers to express that something belongs to someone or something (for example, Joey’s ball, my meal, and the dog’s bone). Finally, a noun is a word that refers to persons, places, objects, or ideas. Also, common nouns are less particular than proper nouns and do not begin with a capital letter (such as lake, tiger, and teacher). Then, proper nouns are words that identify distinct individuals, places, or objects and always begin with a capital letter (such as Lake Michigan, Tony the Tiger, and Mrs. Smith). Also, possessive nouns include both common and proper nouns.

What does plural possessive mean form 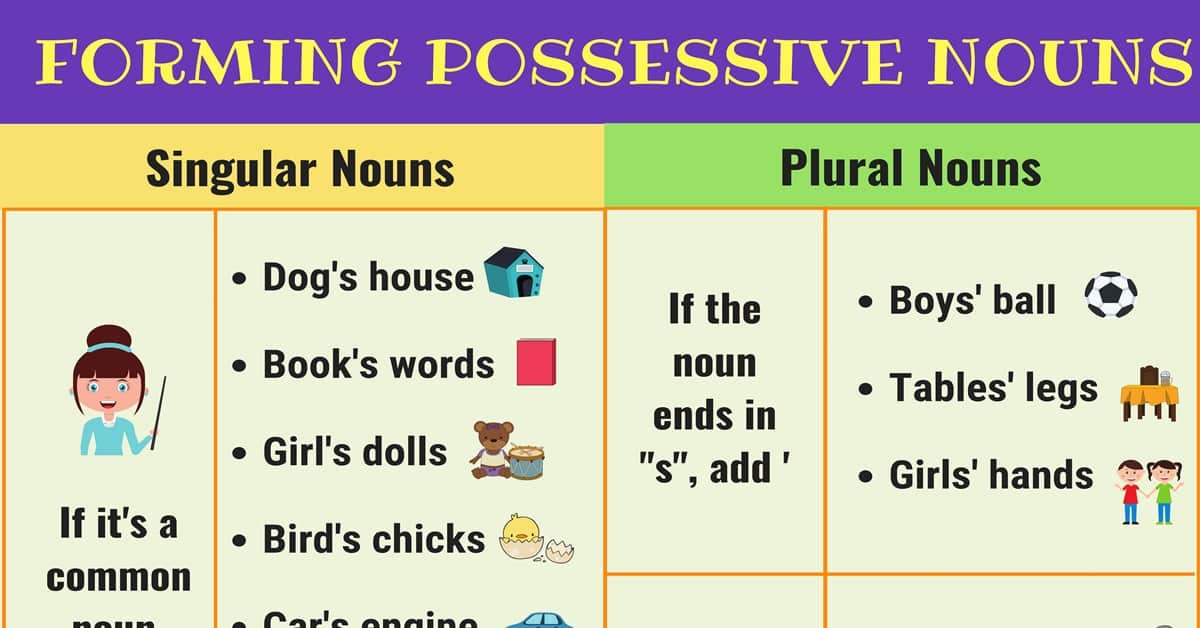 Moreover, a singular possessive noun refers to a single person, place, or object that owns or is related to another element in the phrase. Then, an apostrophe and the letter “s” are required for their possessive form. So, consider the following single possessive noun: “Timmy’s puppy is adorable.” Moreover, this is one of the most prevalent punctuation errors. But it is simple to correct if you understand the difference between plural and possessive. Also, I notice numerous costly vehicles, billboards, and store signs with that additional apostrophe tossed in, such as “The greatest plumbers in the business,” or “Our haircuts are excellent!” while driving around. So, these should be plural (more than one plumber, more than one haircut), not possessive; neither of these statements involves ownership. So, how can you keep from getting apostrophe crazy? Keep these basic reminders in mind:

My, mine, our, ours, its, his, her, hers, their, theirs, your, and yours are examples of possessive pronouns. These are all terms that show ownership. If the book is mine, then it is mine. If the book belongs to her, she owns it. Seeing this aspect of speech in action is a terrific way to grasp it. Here are some simple statements that employ possessive pronouns:

The simple examples above show how to utilize possessive pronouns in sentences. So, the usage of possessive adjectives with gerunds, on the other hand, can be perplexing. A gerund is a word that began as a verb but may now function as a noun by adding -ing at the end. 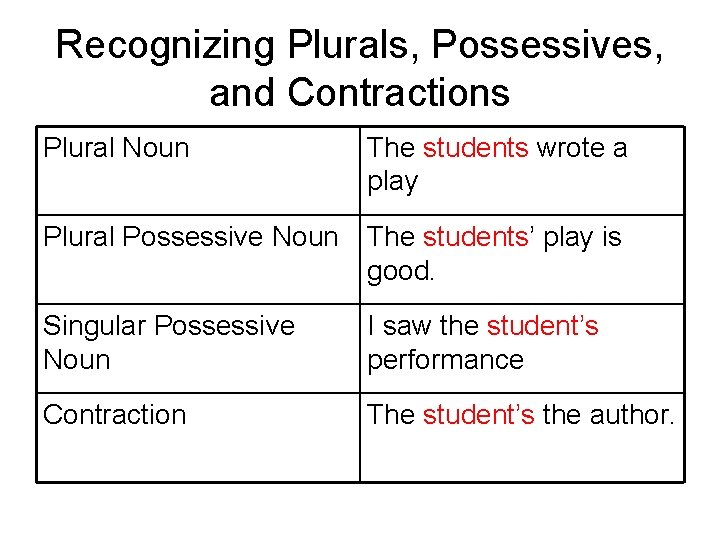 Here are some more examples of possessive pronouns coupled with gerunds.

There are various guidelines for using possessive nouns correctly:

Simply add an apostrophe at the end of standard plural nouns that finish in “s” to denote possession. These are some examples of plural possessive nouns: 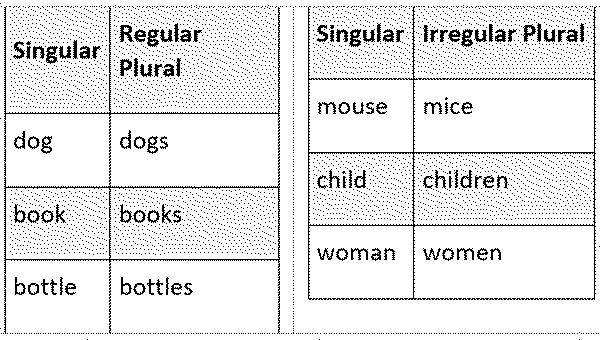 Add an apostrophe and “s” to irregular plural nouns that do not end in “s.” Here are several examples: 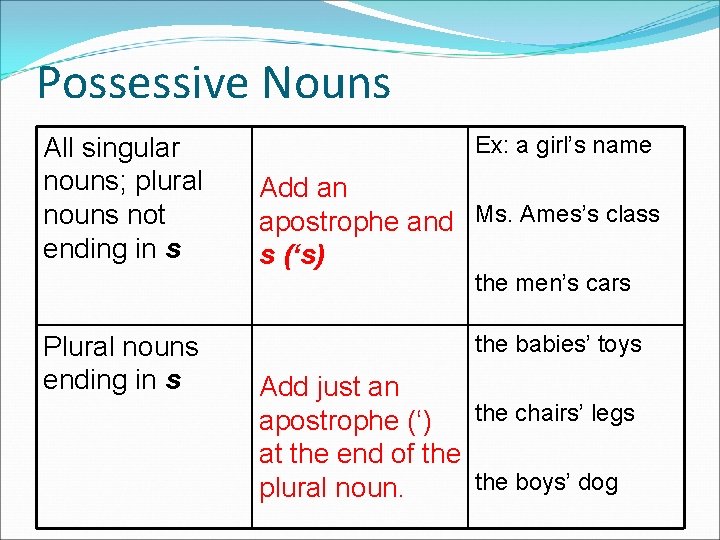 So, hers and his are unusual in that they are used to define the gender of a person (or animal). Then, while these two are the most prevalent, there are several more possessive pronouns that are not associated with a certain gender.

So, it is critical not to mistakenly misidentify someone by using gendered terminology when it is not required. Fortunately, there is a simple approach to ensure that your speech and writing are inclusive of all gender identities: adopt gender-neutral vocabulary. Also, if you don’t know which possessive pronoun to use or prefer not to use a gendered pronoun at all, the term theirs is perfect.

Then, the pronoun theirs can (and is increasingly being used) as a singular gender-neutral or nonbinary alternative for his and hers. (Other words are used in this manner as well, but theirs is the most popular.) Then, when you don’t want or need to define someone’s gender, use theirs. So, it  can also be used to describe someone who identifies as nonbinary. So, in this instance, it’s always vital to utilize the person’s preferred pronouns (and adjectives). 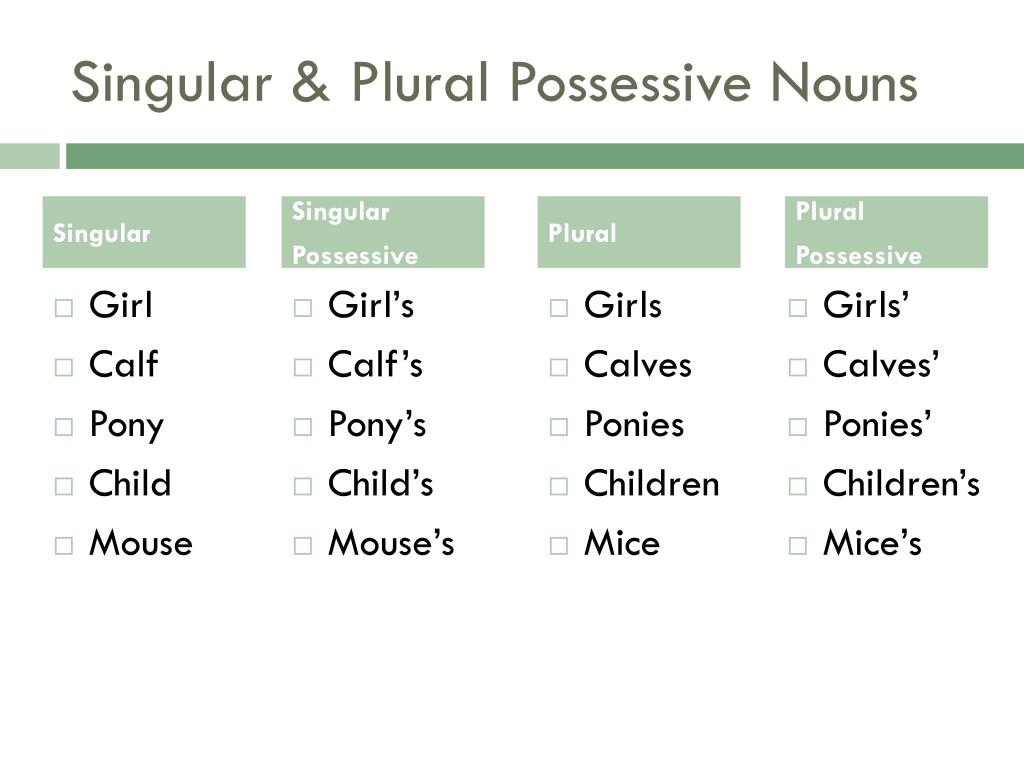 What is an example of a plural possessive?

Where does the apostrophe go for plural possessive?

What is a plural possessive apostrophe example?

Simply add an apostrophe at the end of standard plural nouns that finish in “s” to denote possession. Airplane wings are an example of this sort of plural possessive noun.

What are the 7 possessive nouns?

Mine, ours, yours, his, hers, its, and theirs are the independent possessive pronouns. My, our, your, his, her, it, and their are possessive adjectives, also known as possessive determiners.

What are plural noun examples?

How do you use multiple possessives?

The normal convention is to refer to the two partners as a single entity—a couple—and use an apostrophe only after the final name: “John and Jane’s villa,” “Ben & Jerry’s ice cream.” When you add more owners, you simply need one apostrophe: “Bob and Carol and Ted and Alice’s party.”

To express ownership with an apostrophe, just add apostrophe s or s apostrophe to a word, depending on whether it’s singular or plural. Singular Possessive Apostrophe: Add an apostrophe s to signify singular ownership: EXAMPLES: The fresh tyres for the automobile were close to John’s desk.

How do you make a last name plural possessive?

What are the 3 Uses of apostrophe?

The apostrophe is used in three ways:

Apostrophes should not be used to make possessive pronouns (e.g., his / her computer) or noun plurals that are not possessives.

How do you fix plural possessive errors?

What is a plural pronoun?

Plural pronouns are simply pronouns that relate to many nouns in the plural. Also, plural pronouns, like singular pronouns, can be personal, definite or indefinite, and relate to plural nouns or groups of nouns.

Gravitational force formula- All you need to know

Is sublimation endothermic or exothermic