Do you recall how you would copy or imitate whatever the adults around you did when you were a kid? Did you not have an underlying fear of having to retake some test at school or college? How often do you go back for a second helping of food?

Even though all of these questions above have distinct core verbs, we only need one in Spanish: repetir. You can pronounce it as reh-peh-TEER. The primary meaning of the Spanish verb repetir is to repeat. However, it may also imply to imitate, to retake, or to have a second helping. Likewise, you can easily see and understand them from the examples above.

Moreover, the repetir conjugation is identical to that of most other –ir verbs. However, there is an exception to this too. When the second syllable is stressed or the verb is in the subjunctive mood, the stem of repet- changes to repit-. 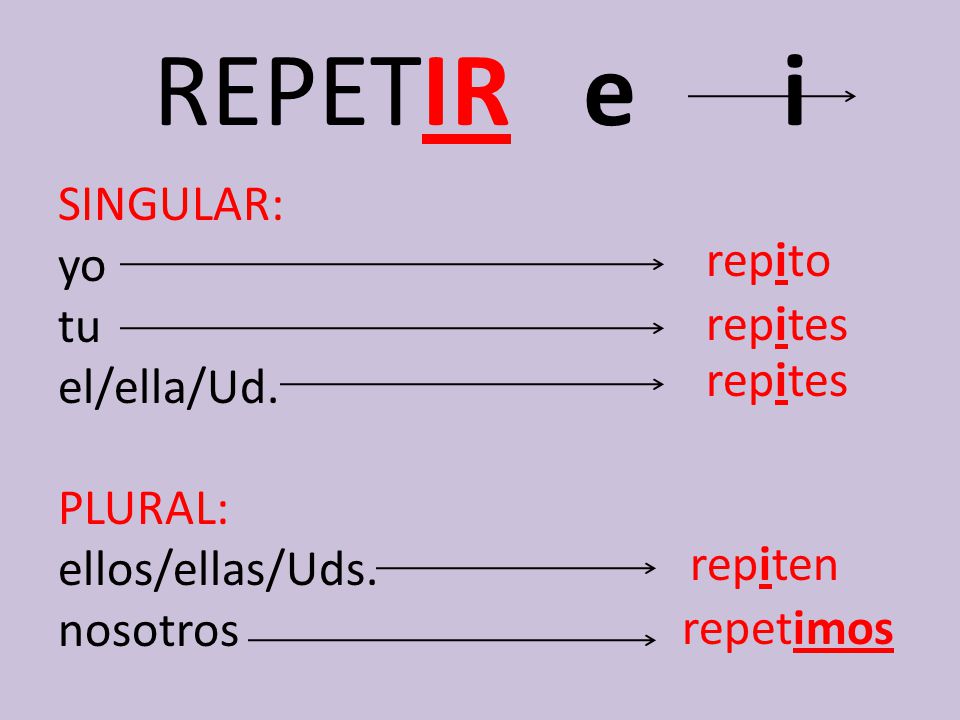 Thus, this article ahead will show you a variety of situations and examples where we use this verb. In addition, it will also throw light on how to conjugate it in the present tense. Scroll over and read on to get a better idea about repetir conjugation.

In French, conjugation refers to the process of changing the endings of verbs. The person, the tense, and the mood all play a role (indicative, imperative and subjunctive). Additionally, the bulk of verbs’ infinitive form defines their whole meaning (eg. – parler). However, irregular verbs call for knowledge of more than just the infinitive form. Likewise, it is one of 7 major components in French. You can conjugate almost any French verb by knowing these 7 essential components of a verb. On the contrary, certain verbs, such as être, are highly irregular. Hence, the 7 core components are insufficient to completely conjugate those verbs.

The alteration of a verb to indicate tense, mood, person, and so on is conjugation. In English, verbs have distinct meanings depending on when and who they are used with. Conjugating verbs includes changing them into a variety of forms in order to convey meaning though. If we regard verbs to represent the action part of speech, conjugation alters verbs. Nevertheless, it does so to reveal who is performing the action and when it takes place. If we do not conjugate the verb and leave it in its infinitive form, the context might be lost.

Nonetheless, in general, the ending of a Spanish verb must be altered to match the subject. Likewise, this needs to be done mainly in order to use it in a sentence. Consider a verb to be a power tool, akin to a drill. It has a variety of bits at the end that can be used for various tasks. Conjugation is another term for this.

The verbs in Spanish are separated into groups. Each group, however, has a different conjugation. Hence, you first need to recognise which category a verb belongs to. Thus, this will help you to master Spanish verbs like repetir (to repeat).

Stem-changing: Moreover, this might change depending on how it is used in a sentence.

Spelling-changing: Some consonant spellings have been altered to conform to pronunciation guidelines.

Reflexive: The action is reflected back on the topic of the phrase.

Moreover, verbs are not always conjugated in the present tense, in fact. There are also a number of causes for them to be altered into various forms – some subtle, some blatant. Grammatical conjugation, on the other hand, is the umbrella term for this verb-specific modifying. Inflection, a fancy way of transforming a word to convey a different or modified meaning, also helps to achieve conjugation. The number, person, and tense of a verb all influence how its conjugation occurs.

As already discussed, depending on the context, the verb repetir has multiple meanings. Let us now look at how to use the present tense or infinitive in each situation.

In the meaning of doing or saying something again, the word repetir implies to repeat.

Gloria and Vienna are discussing their classes at school. Chemistry is Gloria’s favorite subject, since they get to experiment a lot in the lab. She thus says:

(Normally, we repeat the experiment to check that the result doesn’t change.)

Vienna however, prefers literature over science. She is quite good at French. Therefore, she says:

(I repeat the verbs over and over again to memorize the conjugations, but I love learning French.)

On the contrary, Gloria is struggling with the language:

(Well, for me it’s very difficult. The teacher repeats the verbs hundreds of times but I can’t learn them.)

Vienna feels that the best way to learning any language is to repeat and imitate everything that one hears:

(If you repeat what you hear in songs or movies, you will improve your pronunciation.)

Nevertheless, Gloria is worried about her test. If she fails, she is afraid about having to retake it again in the summer.

(I don’t want to retake the exam.)

We use the present tense to talk about routines or habits. These are usually things which we do (or don’t do) on a regular basis. 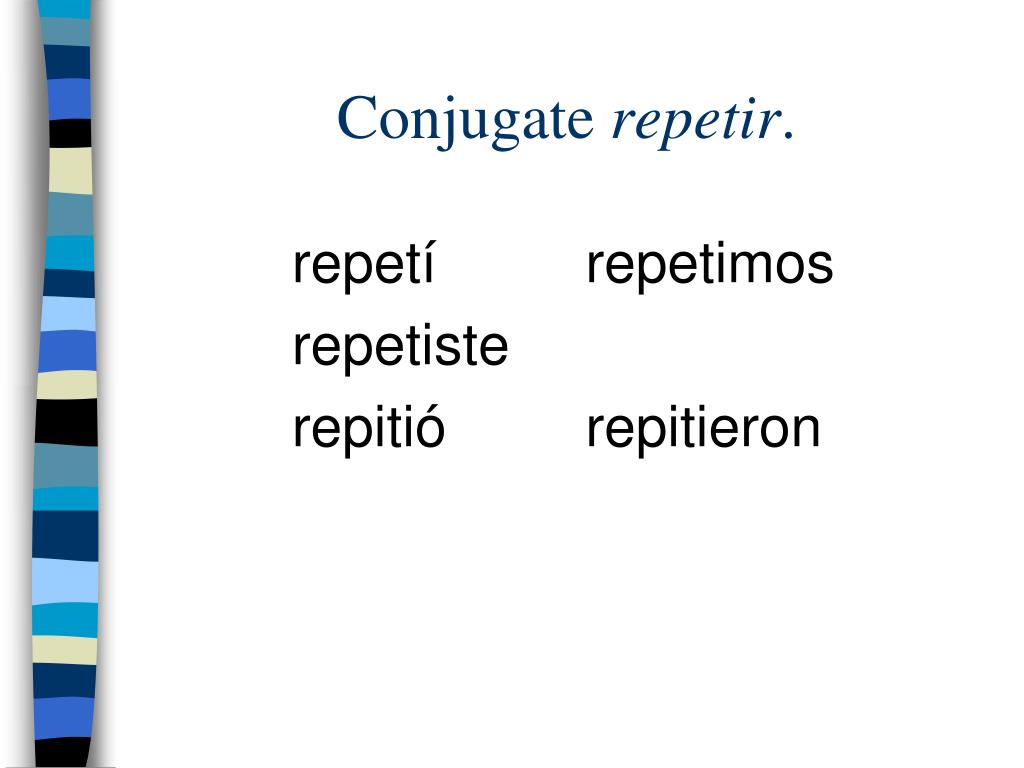 In the present, however, repetir is slightly irregular. Likewise, it means that one of the vowels in the stem varies throughout conjugation. In the present, there are three types of stem changes: o > ue, e > ie, and e > i. Besides the nosotros and vosotros forms, all other forms modify their stem. Except for nosotros/as and vosotros/as, we need the stem repit- for all subject pronouns.

Hence, now let us take a look at it’s conjugation.

In Spanish, the preterite tense is usually the equivalent of the simple past tense. In contrast to the imperfect tense, the preterite usually denotes that an action met a clear end.

Past events that occurred over an undefined length of time are referred to in the imperfect tense. In English, it’s commonly translated as used to + verb or was + verb + -ing.

In Spanish, the periphrastic future tense often replaces the simple future. It is the equivalent of the English going to + verb construction.

Past Infinitive of repetir: haber repetido

The progressive tenses use the gerund in Spanish. Likewise, this is equivalent to the -ing ending, i.e., present participle. Gerunds rarely stand on their own and are usually used in conjunction with the verb estar.

Past Gerund of repetir: habiendo repetido

Past participles can function as either adjectives or as part of a verb form that starts with haber. It usually denotes a complete action.

Past participle of repetir: repetido

In English, conditional verbs are usually translated as would. They usually indicate that if some other condition satisfies, something could happen.

You will find the use of the subjunctive mood way more often in Spanish than in English. It typically follows the relative pronoun que.

In Spanish, there are 2 forms of the past subjunctive. They are typically convertible. However, the first option below is more common.

We usually give/make commands in the imperative mood. In the first-person singular, Spanish has no imperative form though. This occurs since the language assumes you won’t talk out loud in telling yourself what to do.

Hence, the letter e in the stem of the third group of stem-changing verbs changes to i in all forms. However, nosotros and vosotros are exceptions to it. Another e: i stem-changing verb is this one. In comparison however, vivir is a regular verb.