Not too far from the Turkish city of Chania lies the world’s oldest known settlement called Catal Huyuk. It’s actually a relatively recent discovery. A Neolithic town in Turkish that we call Catal Huyuk. What the real name of the statement was is anybody’s guess as it was quite long ago. Probably ten thousand years ago. There is no writing that may be able to describe the settlement. It’s just so old but also quite sophisticated.

In fact, many didn’t think that humans could have lived in such an organized way. Especially so many thousands of years ago. So plus one for our ancestors. Archaeologists excavated Catal Huyuk over several years. Pretty much from its discovery in 1958 to 1964. James Maillard led a team of archaeologists from the UK. Excavation stopped for a while due to some sort of scandal of Maillard. But they resumed again in the early 1990s.

Since its excavation Catal Huyuk has become one of the most famous archaeological sites in the world. The age, sheer size, and the artworks found there in the form of wall painting made it famous. Now after the discovery of Catal Huyuk, archaeologists found several similar villages from around the same time period. It proves that the growth of such communities was not an isolated incident. What the settlements demonstrate is the ship from hunter-gathering to a more agricultural lifestyle. The Neolithic Revolution took place in many parts of the world between the years 10,000 to 7000 BCE. Catal Huyuk is just one example of the community. 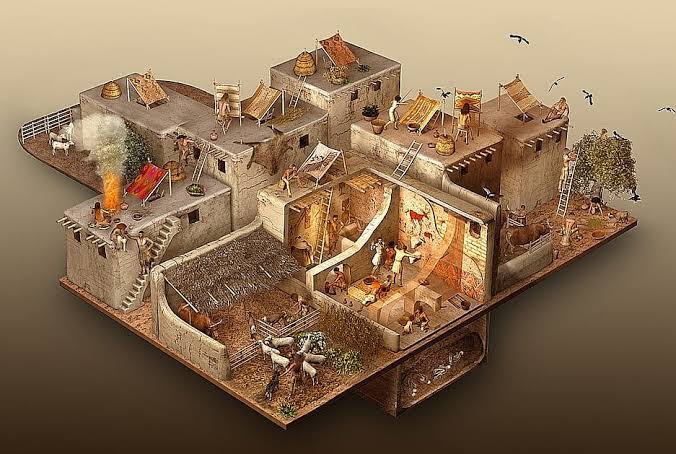 Catal huyuk is located in

central Turkey, southeast of the modern city of Konya. 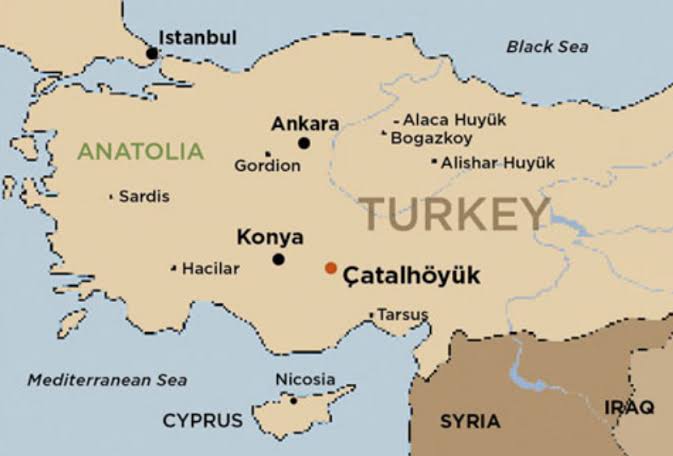 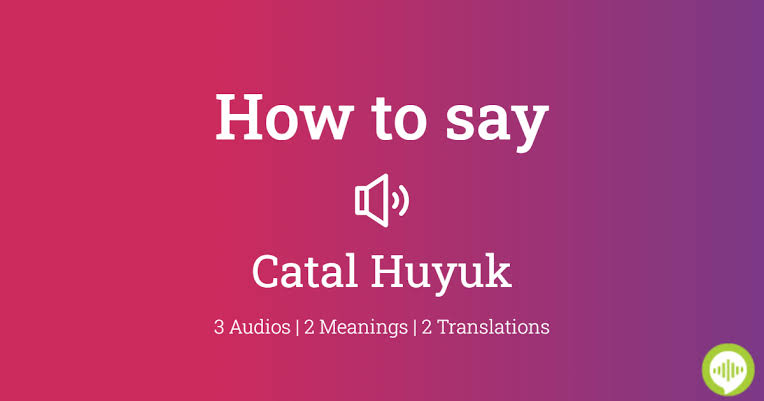 Catal huyuk was a Neolithic and Chalcolithic settlement in southern Anatolia. It is a province in central Turkey, with the lowest levels dating from around 7500 B.C.E. The term catal means fork in Turkish, and huyuk means mound. Hence the name approximately translates to forked mound. It is the largest and most sophisticated Neolithic site ever discovered.

The village also has some of the best Neolithic art and religious symbols in the world. UNESCO designated this site as a World Heritage Site in July 2012. It is an early Neolithic settlement that has successfully transitioned to a fully settled existence. Agriculture produces food through the production of wheat and barley, as well as animal raising. Cattle, in addition to providing meat and milk, can serve as beasts of burden.

An abundance of food allows for the development of specialised trades. However, they used pottery and woven textiles in the village. Archaeologists excavated only a small portion of the site till now. Although it has been occupied continuously from approximately 6500 to 5700 BC. They estimated the population to be around 5000 people, who live in 1000 dwellings.

British archaeologist James Mellaart’s investigations between 1961 and 1965. He identified this part of Anatolia as a hub of advanced culture in the Neolithic period. His investigation catapulted the catalhoyuk site to worldwide notice. Government banned Mellaart from entering Turkey as a result of his role in the Dorak scandal. He produced drawings of allegedly major Bronze Age objects that later vanished. The site sat dormant until September 12, 1993. Later archaeologist Ian Hodder of the University of Cambridge led a team of archaeologists to investigate.

According to British archaeologist Colin Renfrew, these explorations are among the most ambitious excavation operations now underway. Government barred Mellaart from entering Turkey as a result of his role in the Dorak scandal. He produced drawings of allegedly major Bronze Age objects that later vanished. After the debacle, the site sat dormant until 1993. Later, Ian Hodder, at the University of Cambridge, spearheaded an investigation.

According to archaeologist Colin Renfrew and others, these explorations are among the most ambitious excavation operations now underway.

Hodder, was a former Mellaart student. He chose the site as the first real world test of his archaeology theory at the time. 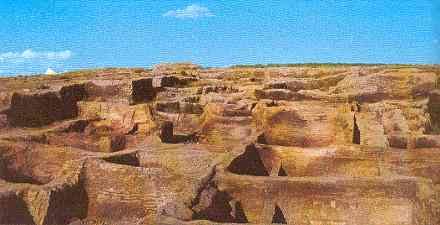 Mellaart referred to the intricate community as the world’s oldest cities. However, rather than a true town, city, or civilisation, it is more like a huge village. In most cases, each house had three rooms. Although some homes are larger than others. Some have more beautiful wall paintings, there are no evident public facilities or signs of labor division.

The purpose of larger structures is still a point of contention among academics.

Archaeologists estimated the eastern mound’s population to be as high as 10,000 individuals. Though the community’s history fluctuated population numbers. A population of 5,000 to 8,000 people is a good estimate. Roofs built of wood and reeds coated with mud provided access to internal spaces. The majority of the holes in the ceiling were accessed through internal and outside ladders. As a result, their rooftops served as streets. 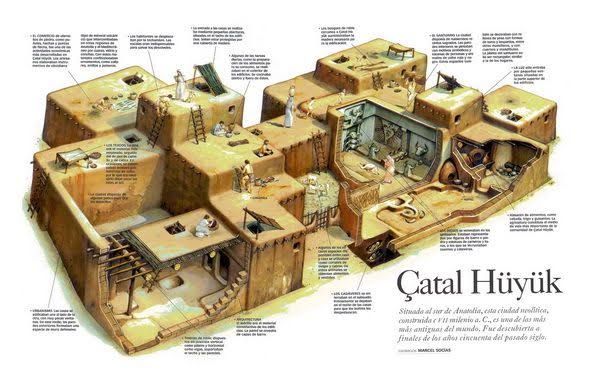 Houses had plaster interiors with squared-off timber ladders or steep staircases. They were commonly located on the room’s south wall, along with cooking hearths and ovens.

Cooking and daily activities took place in each of the primary rooms. Sitting, working, and sleeping were all done on raised platforms built along the walls of the main rooms.

All of the rooms were immaculately clean. Archaeologists discovered very little trash or debris within the structures, but sewage and food waste. They also found wood ash in trash heaps outside the ruins. Many daily activities may have taken place on the rooftops. This possibly created an open air plaza, when the weather was nice. Large communal ovens appear to have been installed on these rooftops in later centuries. Houses were gradually renewed by partial demolition and rebuilding on a rubble foundation, which is how the mound arose. There have been up to eighteen levels of settlement discovered.

Catal huyuk’s residents buried their deceased in the village. Archaeologists discovered human skeletons in trenches beneath the floors, particularly beneath hearths. Also on the platforms in the major rooms, and beneath the beds. Before burial, they bent the bodies tightly. They often placed them in baskets or wrapped in reed mats. Archaeologists discovered some graves featuring disjointed bones in the open. It indicates that they left bodies in the open for a while before being gathered and buried. They found disturbed graves in some cases, and the individual’s skull separated from the skeleton.

Archaeologists discovered some of these heads in different parts of the village. That is why they assume catal huyuk people may have been utilised in rituals. They plastered and painted some skulls with ocher to resemble human faces. Ocher is a practice that was more common at Neolithic sites in Syria and Jericho.

Many of the houses in the village have vibrant paintings and sculptures covering the inside and external walls. The village’s wall map is now regarded as the world’s oldest map. Vultures swooping down on headless people are among the most common imagery. This includes groups of men in hunting scenes. Bulls’ and other animals’ heads were frequently hung on walls.

In addition, archaeologists discovered clay sculptures of women in the site’s upper floors. The people of catal huyuk practised a symbol-rich religion. The lack of visible structures, the burials, murals, and figurines imply that. Shrine or public meeting areas with a high amount of these things could have been used. 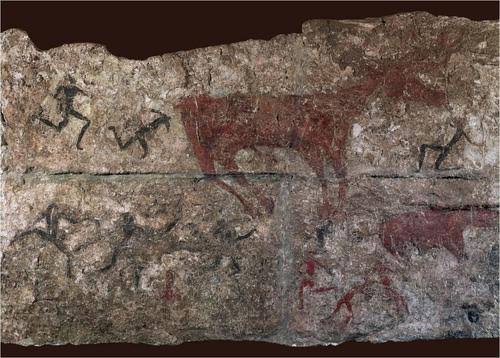 The people of catal huyuk appear to have lived relatively egalitarian lifestyles with no social classes. They had no homes with distinctive features. Recent examinations have also revealed that there is little social discrimination based on gender. Both men and women receive equal nourishment. They have a social position that appears to be generally equal. Wheat and barley, as well as lentils, peas, and other vegetables, were grown by the locals.

They herded sheep and goats, and evidence shows that cow domestication began about the same time. Hunting, on the other hand, remained a key source of meat for the population. The production of pottery and obsidian tools were important enterprises. Obsidian tools were almost certainly used and sold for commodities.

Female figures are a standout feature of Catal huyuk. Mellaart claimed that the well-formed figurines were made of marble. Along with blue and brown limestone, schist, calcite, basalt, alabaster. Despite the existence of a male deity, statues of a female deity were more heavy. This, however, does not appear to be portrayed at all after Level VI” (Mellaart 1967, 181).

They discovered these statues primarily in sites Mellaart assumed to be shrines.

Archaeologists also found bull and other animal heads in abundance. Many of them have been fixed on the inner walls of structures. 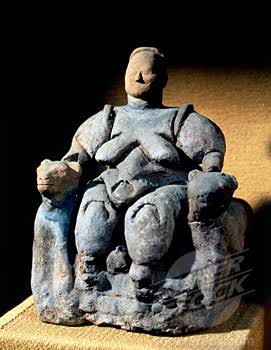 The breasts are full, and the hands rest on them, while the stomach is expanded in the middle. The head is gone, and there is a hole in the top for it. When you flip the figurine around, you’ll see the arms. They are very thin, and on the back of the figurine. You’ll see a skeleton or the bones of a very thin person. However, the ribs and every single bone of a body part are all visible. We can interpret the figurine in a variety of ways. A lady transforming into an ancestor. A woman connected with death, or death and life coming together.

It’s possible that the lines surrounding the body are ribs rather than wraps. This is a work that may challenge us to reconsider our assumptions about the nature of catal huyuk society and images. Perhaps the significance of female imagery was due to some specific role of the female in regard to death, as well as motherly and nurturing roles (Hodder 2005).

Hodder isn’t sure if the figures are religious deities, but he thinks they’re important regardless. He believes that before humans could domesticate the wild flora, they had to tame their own nature. Hodder also feels that the early settlers of Catalhoyuk placed their community in the finest location.

1. What does the term catal Huyuk imply?

Ans. Catal Huyuk refers to the site’s east and west mounds. This place arose as locals tore down and rebuilt the settlement’s mud-brick buildings over generations. No one knows what the residents of the town called their dwelling 9,000 years ago.

Ans. The site is in central Turkey, southeast of the modern city of Konya.

3. How old is Catal Huyuk city?

4. Did Catal Huyuk have a religion?

Ans. The people of Catal Huyuk practised a symbol-rich religion.

5. Why was catal huyuk abandoned?

Ans. Researchers believe that the operation of excavating for clay altered the river’s drainage. Subsequently, the river path contributed to Catal Huyuk’s abandonment.